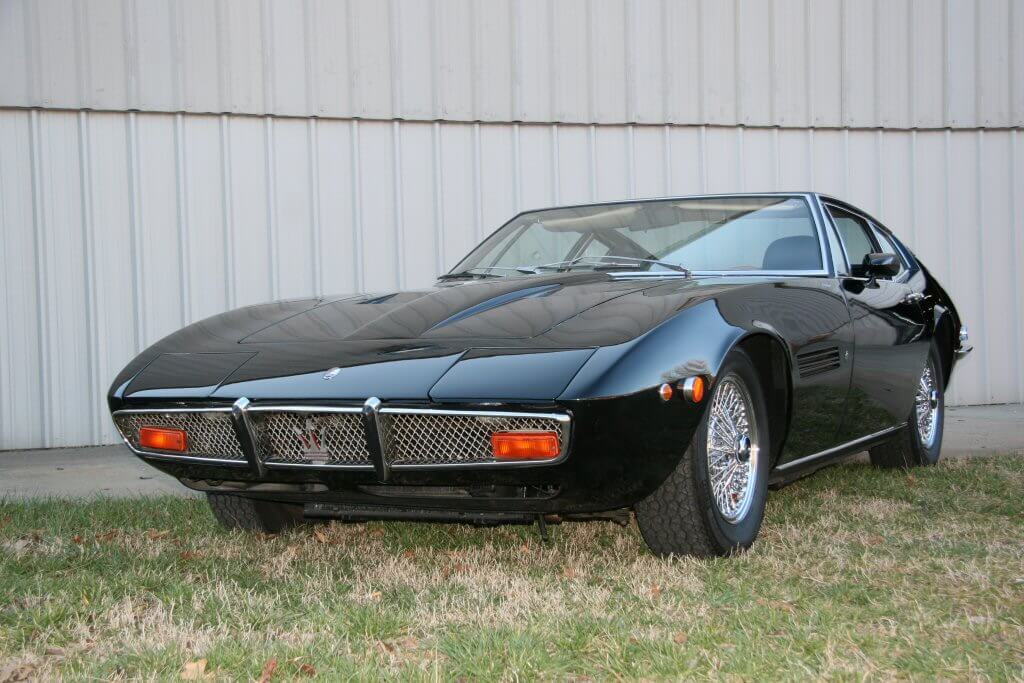 Designed by a young Giorgetto Giugiaro while at Carrozzeria Ghia, the Ghibli has been referred by some as the most beautiful sports/GT car of all times. Even if you do not agree with that strong of a statement, there is no denying the Ghibli is certainly a very striking and handsome car whose timeless design has aged very well. The Ghibli was named after a hot, dry wind blowing over the Sahara.

The exterior styling is equally matched by a gorgeous interior. The Ghibli interior is quite spacious and can easily accommodate tall drivers. One famous Ghibli owner was basketball star Wilt Chamberlain.

In 1969, primarily after demands from the US importers, a spyder version of the Ghibli was introduced. The proportions of the car viewed from any angle can only be described as perfect ! A beautiful removable hardtop was offered, but only between 25 to 40 cars were shipped with this option. Spyders that were originally equipped with the hard top will have two chrome plugs covering the rear anchoring points for the top. In the late 80's several Ghibli coupes were converted to spyders, so make sure to check serial numbers when making a purchase. All spyders had a odd ending serial number (same number and chassis and engine), also many have an "S" designation in the serial number, example AM115S 1181, although there are quite a few cars without this designation.

Although the factory never classified the Ghiblis in two series, there are many differences between the early cars (1967 to early 1969) and late cars (late 1969 to 1973). This was an evolutionary process so expect to find some late features on an early car and vice versa. All Ghiblis had air conditioner and many post 1969 cars have power steering. The earlier cars had true knock off wheels while later cars have bolt on wheels. At least 5 different wheel types were offered; early cars were either Borrani wires or Campagnolo solid with true knock offs. Later cars were offered with Borrani bolt on wires and either the bolt on Campagnolo star burst with "fake" knock off covering the bolts (later used on the Khamsin) or a Campnologo wheel, similar to the Indy,. Some Ghibli were equipped with automatic transmission, especially on the spyders, which was a rather sluggish unit and should be avoided.

The late cars have rocker switches to comply to US regulations. Somehow the US government felt the pointy toggle switches were dangerous during an accident! The toggles are more reliable and personally I find them more attractive. The rocker switches tend to be more troublesome (electrically they are rather weak and the plastic chrome tends to break) and the late turn signal switch is definitely problematic and very expensive (the early car turn signals seldom break). Weber 42CDNF carbs were used on the later cars and a single brake booster, plus better cooling fans. The late cars tend to be better sorted out and therefore more desirable. Still, do not rule out an early car. A good well sorted early Ghibli can be a joy to own. The challenge is to find a Ghibli that is well sorted out . No matter if it is an early or late car. Having owned and driven several 4.7 and 4.9 "SS" cars, I can say there is not that big of a difference. My recommendation is to look for a good solid car. One that runs and drives the way it should and shows signs of having been "loved" by its previous owners.. Do not worry too much of it being a "SS" example, it is just a bunch of hype from people that do not know these cars!

The Ghibli has been compared many times with the Ferrari Daytona. Both have similar dimensions, were offered at the same time and had similar list prices when new. While the Daytona will outperform the Ghibli, the Ghibli will "out drive" the Daytona. You can easily drive a Ghibli in comfort on long trips and it will behave very docile around town. On several occasion I have taken a Ghibli spyder on 12 hour trips and during the 2000 MaserMiglia it clocked 1500 miles in 3 days going over the mountains of the continental divide and crossing the desert with an outside temperature of 110F. The Ghibli never overheated or broke down .... and at the end of the trip by body did not feel like I was just run over by a truck! How many Daytona owners would dare make that trip ?