The 3500GT coupe was introduced in 1957 and from the beginning Maserati was interested in adding a spyder (convertible) version to the product line. Maserati, being a small manufacturer, decided to delay the introduction of a spyder. Frua created a spyder prototype with strong American influence Carrozzeria Touring, who was building the coupes, completed three spyder prototypes based on the coupe that was already in production. These cars looked very much like a coupe, but without its top, and used the standard 3500GT wheelbase. Apparently the folks at Maserati were not impressed with either the Frua or Touring designs. In 1959 Carrozzeria Vignale was given the challenge of designing a spyder using a shortened version of the 3500GT chassis which Maserati provided. At the time Giovanni Michelotti was Vignale's chief designer. This car is the first prototype of the Vignale spyder. It is also technically the very first production Maserati convertible built as all other were prototypes that never made it into production.

This is a copy of Michelotti's original sketch. Notice the asymetric hood bulge:

The car was completed on August 13, 1959. It was shipped back to Carrozzeria Vignale on August 24, 1959 and returned to the factory the day the Turin Motor Show started (September 31, 1959). According to Adolfo Orsi, who owns prototype # 623, this car was considered probably a bit too difficult to build for the production and the Michelotti ideas were simplified for prototypes #505 and #623, which were officially introduced at the 1959 Turin Motor Show which was held from September 31 until 1November 11, 1959 (#505 at the Maserati and #623 at the Carrozzeria Vignale stand).

This car was delivered to its first owner, Joe Lubin of Los Angeles, on November 3, 1959. Mr. Lubin was a major Maserati supporter, good friends with Omar Orsi and Alfieri, and he owned the very first Tipo 61 Birdcage, raced by Bob Drake. He also owned a 250F that saw action in the US Grand Prix at Riverside in 1960. The April 1997 issue of Il Tridente features the interview Willem Oosthoek did with Mr. Lubin. Joe was a major aftermarket Caterpillar parts dealer in South Central Los Angeles. The business went under the name TAP, which stood for Thrifty Auto Parts, a reference to Joe's early career. He actually referred to the convertible in the interview: "I had three of them [Maseratis]. A Quattroporte, a 3500GT Coupe and the most beautiful convertible version of the 3500GT with chrome wire wheels. I traded that convertible in at the Beverly Hills Cadillac dealer for two Cadillacs." 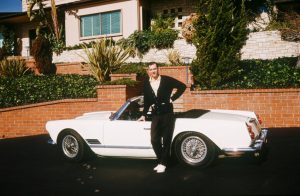 A year later it was sold to Don Cooper who can be seen in this photos taken on December 1960.

It was later sold to Richard Holst of Camarillo, California. Mr. Holst was an engineer at Point Mugu military base in Ventura, California. In 1975 or 1976 the car was purchased by Edwin Good from Ventura. Mr. Good drove the car for a few years and last registered it in 1980. This car had been in the Los Angeles area all its life and has the black California plates.

nice condition for its age with the only signs of rust being the right and left front rocker panels, just under the lower louvers. Body gaps are great and panels did not need adjustment. Paint was mostly original and the interior was all original. All the chrome and wire wheels needed to be done. The paint was too far gone to be saved. Luckily it Mr. Good did start the car from time to time but I would estimate it had not started in at least 25 years The engine did not turn when I purchased it. The body was in extremely iwas all complete with the exception of missing one of the headlight trim which I had it reproduced. The trim has a small dimple on the top which is the start of a fender character line. Very nice detail but probably too intricate for a production car. The trim to body fit is so good that most trim pieces (grill, bumpers, tail lights) do not have a gasket between the trim and the body.

In January 2012 the restoration was completed.

Click here to see photos of some of the other Vignale spyder prototypes, or click here for a list of all the 3500GT Vignale spyders, including the production models.